I am spending a lot of time in the South Lake Union neighborhood in Seattle.  One of the joys of visiting this area is encountering the banistas of Amazon. 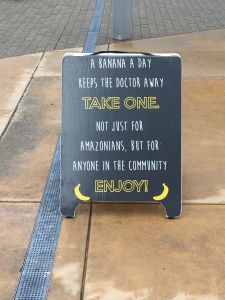 When I see the sign I know that free bananas are close by.  Who can resist a free banana?

And who knew that there was a job title of “Banista”? 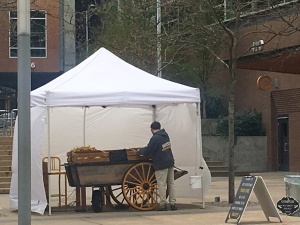 At 8am in the morning, there is a Banista to greet me and invite me to take more than one banana if I like.

I just have to smile.  Then my reptile brain cuts in and shouts “there must be something wrong with these bananas or what is Amazon’s ulterior motive?”  I quickly quiet the shouting and my gracious self thanks the banista, peels my banana, and I go about my day with a smile.

So what are these banana stands really about?

“The Amazon community banana stand started in 2015 as a fun, quirky way to hand out healthy snacks to anyone in the community.

Since then, the community banana stand has expanded to two locations and become a weekday neighborhood pit-stop for anyone in South Lake Union (Terry Avenue, in Van Vorst Plaza near Mercer) or the Denny Triangle neighborhood (in front of Amazon’s Doppler building on Westlake Avenue).

In January 2017, we hit a milestone of handing out more than one million bananas. As long as the community keeps loving their daily bananas, We will keep it running.

We welcome everyone to come by and enjoy a banana; you don’t need to be an Amazon employee. While you’re there, maybe pick up an interesting fact or two from our friendly “banistas.”

It took a while but I was able to find a reference to some of the urban legends that have grown up around Amazon’s free bananas.

“Amazon hopes the pop-up is here to stay. “Bananas are a great healthy snack with built-in compostable packaging,” an Amazon spokesperson told Geekwire in a statement. “We hope the community likes it, and if they do, we’ll keep doing it.”

As you might recall, the company’s reputation took a trouncing on the heels of a damning New York Times article earlier this year. Published on Aug. 15, the deep dive depicted Amazon as a ruthless workplace, as our own Nina Zipkin put it, “where frequent criticism, tears in cubicles and a constant refrain of ‘Amazon is where overachievers go to feel bad about themselves,’ are part of the employee experience.”

If this is just a publicity stunt to show the public Amazon isn’t so hard on its workers after all, it seems a bit bananas to us.”

A graphic designer friend of mine shared that Amazon gives away bananas because the banana is similar to the arrow in the Amazon logo:

Whatever the reason, bananas and banistas bring a smile to my life when I visit South Lake Union.

This entry was posted in Lifelet. Bookmark the permalink.