It is so hard to watch the daily news showing peaceful protesters demonstrating against all that is wrong with my country.  I want to be with them.

I want to visibly lend my voice with black Americans who are so wronged by our police and our economy and the ravages of a pandemic.  Black Lives Matter!

I am now a Vulnerable.  Covid-19 is a clear and present death sentence at my age.

I want to let our dysfunctional politicians know in person that they need to live up to their respective oaths of office.

I am now handicapped.  Getting caught in a stampede caused by police brutality and all manner of military armaments is a death sentence in my physical condition.  I can no longer physically run away.

I want politicians to hear my anger and heart ache, not just my inanimate TV that I scream at daily.

I am so disappointed in our country because I was stupid enough to think that by electing President Obama for eight years, a black American, that we had finally matured as a country.

I cry in my sleep that I was so wrong.

I was so wrong.

I give what I can to free the wrongly arrested peaceful protesters and to political campaigns in “red states” to elect politicians that are ethical and who will guard our democracy and who will de-militarize the police departments.

I don’t think so.  I want to be out on the streets peacefully protesting.

These protests and riots and police brutality are with me since I came of age in 1964 in the aftermath of the Rochester, NY, race riot.  We left Rochester shortly thereafter to move to Hendersonville, NC, for my father’s new job.

I arrived as a sophomore in high school the year after the city schools were integrated.  Racism was present at every turn depending on who you spent time with.  The times were peaceful and I was hopeful that we were in a better place.  My family and I watched in dismay the 1967 race riots in Detroit as the apartment that my grandmother and my uncle lived in just three years previously before was burned to the ground.

I thought I was safe now that I was away from the North.

I looked forward to attending Duke University in the fall of 1967.  Little did I know what awaited me during the next four years.

In the fall of 1967, while taking a shower in the men’s gym, I stared aghast at lines of ugly scars on the back of my biology professor.  I was too embarrassed to say anything to the professor.  I asked a grad student the next day what happened.

“Don’t you remember,” he said.  “The good professor participated in the sit ins at the Woolworth in Greensboro, NC in July 1960.  Those scars you saw were the result of being bull whipped by the white Sheriff’s department.”

“But the professor is white,” I said.

“Welcome to the south,” he replied.

On April 4, 1968, Martin Luther King was assassinated.  On April 8, Duke students started a peaceful vigil on the main quadrangle on West Campus.  I didn’t spend my nights on the quad, but I spent a lot of hours during the day listening to the speakers from many different walks of life.

1968 was an election year and I watched with horror as George Wallace ran for president and was popular in North Carolina.  On October, 24, Wallace held a rally and gave a speech in downtown Durham.  I was one of the demonstrators trying to shout the racist down.   I remember Wallace’s response to the crowd like it was yesterday:

Wallace received a mixed reception. While one local newspaper reported there were “oceans” of “Wallace for President” placards in the crowd, other demonstrators carried signs such as “Nobody Wins with Wallace” and “Hitler Was to Jews What Wallace Is to Blacks.” Responding to hecklers, Wallace said, “Let them get on television and it will all be over with,” and “I don’t know what they teach in college these days, but they ought to teach you how to behave in a crowd.”

The rally was one of my first encounters with tear gas, although not from the police.  Fortunately, Wallace was defeated but not before making clear how much of the country supported his candidacy.

In 1969 the riots and tear gas moved onto our campus at Duke.

“On February 13, 1969, between 50 and 75 Duke University students (many of whom were members of the Afro-American Society) occupied the Allen Building (Duke’s main administration building) to bring attention to the needs of African-American students. These needs included an African-American studies department, a black student union, protection from police harassment, and increased enrollment and financial support for black students.

“The students remained barricaded in the Allen Building for most of the day, leaving sometime after 5:00 PM after an ultimatum from the Duke administration. Although their exit was peaceful, a large crowd of mostly white students had gathered outside the building during the day, and this crowd and the police became entangled. The police fired tear gas on the students, prompting further campus protests.” 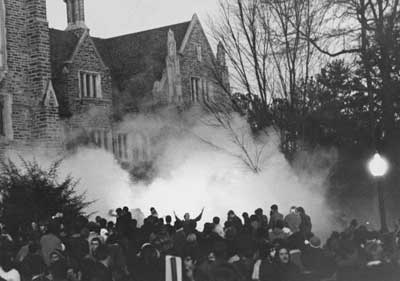 What none of us knew was that after the George Wallace demonstrations, the City of Durham police department applied for Federal aid to obtain full riot gear, tear gas generating machines, and tear gas guns.  Prior to the peaceful student exit from Allen Building, the police had massed in Duke Gardens to assault the administration building and forcibly remove the student protesters.  Nobody told the police the students left the building.

In the above article about the riots, the term “entangled” is a polite description for the mess that followed.  As we watched, the police came storming out of the building immensely frustrated because they were not able to bash any black heads.  We started yelling for the police to “Come out with your hands up.”

The police went nuts and started using their new riot toys to spread tear gas all around in an attempt to disperse those of us protesting.  As quick as they would fire a tear gas canister, we would pick it up and throw it back at them.  Before we knew it, we had a riot on our hands.

Nobody let the police know that the black students had left.

Police cars were burned.  Students were chased.  Clouds of tear gas colored the quadrangle a surreal Martian orange.  The university Caroliner had climbed to the top of the Duke Chapel bell tower to play the MICKEY MOUSE Club song as the police sprayed tear gas chasing students.

The media entered into the mess with the ability to do live broadcasts about this time.  Broadcast crews showed up from around the Research Triangle.  Since my dorm was right across from the administration building, we would come inside every 10 minutes or so to see how the press was covering our riot at Duke.

Soon it was time for the Jesse Helms editorial commentary on Raleigh’s WRAL TV.  We all knew he was a racist, but he usually disguised his bigotry.  That night, he spewed hatred and the “N” word several times describing the actions of the Duke students.  We couldn’t believe it.  Now we were angered and went back to the quad to engage with the police in a louder shouting match.  Another police car was turned over and burned.

In July, 1969, NASA distracted us for a while.  On July 20, 1969, Neil Armstrong became the first human to step on the moon.  The racial divisions in our country were pushed aside for a week as we all watched TV to make sure that the astronauts got to the moon AND came back safely to earth.  This time of scientific and engineering achievement was the golden age of facts being important.

I find it painfully coincidental that in the midst of a pandemic and the pain of another black American killed by police, that we took time out to witness Americans going to space again on an American rocket.  In horror, I watched the gall of the politicians who deny science and facts, celebrate our return to space through the results of exacting science and engineering.

For the next thirty years after the 60s protests, I married, raised three wonderful children, pursued a career in software engineering and entrepreneuring, and moved to Seattle.  I forgot my roots of peaceful protesting.

I was briefly reminded of the importance of protesting in 1999 when the World Trade Organization came to Seattle.  Each morning as I would get off the ferry for work, I would see hundreds of protesters with their signs and costumes ready for a day of protest.  But this was a strange protest because there were at least 50 issues that were being protested either pro or con.  The mayor and team established protest intersections for each of the 50 issues with the “for” people on one side of the street and the “against” people on the other side of the street.  During work breaks, I would wander the streets mesmerized by the plethora of issues and protests.  It was so laid back Pacific Northwest.

Then the rioters and looters showed up after dark.

On my way back from the Westlake Center to the ferry, I got caught between a crowd of protesters and the police.  I got a full dose of tear gas.  I made it home safely.  But the smells of tear gas reminded me of a time long past.

This is a long winded way of saying that my life experiences and my memories are full of the pain of black Americans not receiving justice.  I am ashamed that I have not done more.

I want to be on the streets protesting.

I can change myself.

I can be the change I want to manifest in the world.

“Instructions given by the military departments to our troops before the Normandy invasion reminded soldiers that “The Nazi slogan for destroying us…was ‘Divide and Conquer.’ Our American answer is ‘In Union there is Strength.’” We must summon that unity to surmount this crisis—confident that we are better than our politics.”

“Donald Trump is the first president in my lifetime who does not try to unite the American people—does not even pretend to try. Instead, he tries to divide us,” Mattis writes. “We are witnessing the consequences of three years of this deliberate effort. We are witnessing the consequences of three years without mature leadership. We can unite without him, drawing on the strengths inherent in our civil society. This will not be easy, as the past few days have shown, but we owe it to our fellow citizens; to past generations that bled to defend our promise; and to our children.”

We can unite without him.

We can change.  We must change.

This entry was posted in Citizen, Lifelogging, Patterns, Reflecting. Bookmark the permalink.