Where the Rubber Meets the Sky

As Aldus merged into Adobe in the early 1993, I put together a “gift” collection for those colleagues I’d grown close to over the three years I had the privilege of being an Aldus Executive.  The collection was a set of visions, poems and stories that I had collected over the years.

So much of the business environment is filled with people who are operationally focused.  These folks are cut out of the mode of “where the rubber meets the road.”  I always seem to take the other fork in the road, the one “where the rubber meets the sky.”  My most valued moments are those when I envision a possible future and then go out and create it with a set of folks who love to make dreams come to life.

I’ve been fortunate to take those dreams and turn them into successful ventures for the companies I’ve worked for.  Aldus was a set of people who attracted me from the start.  Aldus was a company in which I hoped I could see my life goals come to fruition; where I could combine my mind, body, and spirit to create the next desktop revolution – interactive.  There was a heart in this company that continues to attract people with the 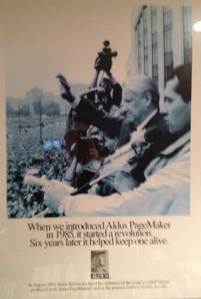 spirit and zeal to help change the world for the better.  Doug Stuart, Aldus Engineering Director, first provided a glimpse of the Aldus heart when he pointed to the Yeltsin Poster that was used for advertising during my early interviews (I managed to keep the framed copy when I left Aldus and it hangs in my office).

Peter Gelpi, Sales Manager for Asia Pacific, described how he knows the Aldus vision and heart has had an effect on the world.  Peter relates, “I’m not really into the technology and design of desktop publishing software.  Where I get my real highs is traveling throughout the third world, and coming across PageMaker being used by ordinary people to communicate.  I’ve been in the wilds of China, India and Africa, and seen people using a bare bones PC when maybe they only have electric power a couple of hours a day.  Often they are the only alternative source of news to the controlled communications of repressive governments.”  Once Peter stated this I immediately envisioned a commercial like the Coca-Cola “I’d like to teach the world to sing..” advertisement with a nice catchy jingle and a montage of people all around the world using Aldus PageMaker in their native language to get their words out.

As I reflect on my time at Aldus, I often hear in my head a refrain of Harry Chapin’s, but with a slight paraphrasing from music to creating:

This entry was posted in Learning, organizing, User Experience, Working in teams. Bookmark the permalink.

2 Responses to Where the Rubber Meets the Sky