As social media gets better and we all become more connected, I enjoy taking a break for reflection on the web of relationships that led me to some node in my personal, operational and strategic networks (see Harvard Business Review article on “How Leaders Create and Use Networks“).  An executive at LinkedIN talked about how once a week she maps out some of the interesting network relationship interactions she had that week.

This week my reflection is on the strange paths that led me to get to know and then collaborate with two of the three Socha Brothers (David, George and John).  My first introduction to the Socha brothers was to George Socha who is one of the leading legal electronic discovery consultants.  We met in 2001 as part of my business development and strategic networking I did for Attenex, the company I founded to develop software visual analytics for document review in eDiscovery.  Along with Tom Gelbmann, George started the Socha-Gelbmann ED Survey reviewing the hundreds of eDiscovery vendors.  While we were not ready to publicly announce our product, we were interested in meeting the key influencers in this market segment.

Once we announced our product, we supported the ED Survey and were very interested 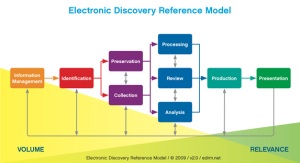 in the Electronic Discovery Reference Model project.  George is one of those really well connected networkers that every fledgling market really needs.  While working at a law firm, George saw the need for a service that would help guide law firms in the selection of technology and vendors for eDiscovery.  He formed Socha Consulting and has continued to evolve his offerings with Apersee.  While we interacted at general legal conferences and brought George in to consult with us at Attenex several times, I really got to know George at the Legalworks series of conferences that he organized where I participated as a panelist.

As a social introvert, I usually avoided the speaker dinners but George constantly let me know that I was missing the best part of the conference.  When I finally attended one of the dinners, I couldn’t believe what I had missed.  During our panel sessions at the conferences, most of our time was spent educating new lawyers to what eDiscovery was about.  However at the dinners, judges, leading thinkers on eDiscovery, and the innovators among the vendors could spend quality time both getting to know each other as well as talk about the future of eDiscovery.  I had always viewed my work for Attenex at these conferences as giving a good presentation.  I didn’t realize that the most important work was creating relationship capital with the thought leaders.  I am forever grateful to George for opening my eyes to the real work of these conferences.

The high point of these conferences was when George and I were able to take our spouses to London for one of the conferences and get to know each others respective families.  While the conference was great, the high point of the trip was being invited by Craig Ball and his wife to attend the London West End production of “A Few Good Men” with Rob Lowe.  Rob was a hit star on the TV Show “West Wing” at the time and my wife was ecstatic when Craig helped her get a photo with Rob after the play ended.

In June of 2002, I got a phone call from David Socha after a virtual email introduction from a mutual colleague, Emer Dooley, asking if I would teach a class in his undergraduate computer science class that summer.  I asked him how he’d gotten my name and he shared that he was looking for somebody who could talk about software development in the context of business.  He asked the professor who’d taught the class the previous year if he knew anybody with that combination of skills.  The professor did not know of anyone, but pointed David to Emer Dooley who suggested David get in touch with me.   Once again the web of contacts in a small world network worked.

I was delighted that David asked me to teach and we settled on a topic and a time for later that summer.

After I hung up the phone, I looked at my notes and David’s email address and started connecting the dots.  Did I just land in yet another small world phenomena?  So I sent an email off to George Socha and asked if he had a brother in Seattle, named David.  George replied immediately and said “Yes.”  I always loved George’s ability to be succinct.  So I called David back and asked “Do you happen to have a brother named George who is a lawyer?”

David said “Yes.  How could you know that?”

I laughed at the synchronicity and shared “You probably have no idea what my company does?”

I explained “I know your brother George quite well as we make a product for electronic discovery and George has been incredibly helpful to us in guiding us through the process of developing our business and critiquing our product.”

David sheepishly shared “You know, George and I never talk about our work.  He is a lawyer and I’m a computer scientist.  We don’t have a lot in common.”

So I asked David if he would mind coming into the office for a demo of our product and a tour of the office and then an extended lunch.  He agreed to meet the next week.  When I greeted him in the office, I started laughing again.  I couldn’t help myself, “you look just like your brother.  How am I ever going to tell the two of you apart?”

David laughed as well and said “Yes, we both wear glasses and have similar hair lines (what George called follicly challenged).  Even our respective kids often can’t tell us apart when we are together.”

So we went back to my office where we had the first of many demos and whiteboard discussions that have regularly punctuated our collaborations over the last 10 years.  However, I noticed this strange parade of Attenex employees coming by my office window to stare at David.  When the VP of Marketing knocked and came in, he went straight to David and said “George, I didn’t know you were going to be in the office today.  Stop by my office on the way out.”  David and I got the giggles at that point.

“Mike, I’d like to introduce you to David Socha, George’s brother.”  We all had a good laugh as Mike apologized.  After Mike left, I suggested that David go by our CFO’s office and ask for George’s consulting check and see if he could fool our CFO.

From these early interactions, David and I realized that we had a mutual interest in software design and how to teach software design.  This interest led to the collaboration on a talk at a Harvey Mudd conference on Engineering Education and then to a journal article in the International Journal of Engineering Education on “Is Designing Software Different from Designing Other Things?”  As part of writing the article, David mentioned his third brother John Socha-Leialoha, who created the very successful software application Norton Commander.

After sharing with David the insights I’d gained from reading Neil Gershenfeld‘s Fab: The Coming Revolution on Your Desktop – From Personal Computers to Personal Fabrication, David mentioned that was another area of John’s expertise – designing and manufacturing buildings, train cars and scenery objects for N guage trains.  So I moved meeting John from something to do in the future, to wanting to make it happen sooner.  In December of 2005, David, John, and I had lunch.

John is clearly the introvert of the three Socha brothers.  I rarely have much trouble carrying on a conversation with someone I am interested in learning from, but John was a challenge.  David had forewarned me, but as usual I didn’t listen.  While it took awhile, eventually we got moving on topics of mutual interest.  John was fascinated that any business executive could be the least bit interested in the design and manufacture of model train objects.  I learned a lot about how to do low volume just in time manufacturing and could see that Gershenfeld was right about how soon we would be having desktop 3D printers.

After I left Attenex, I haven’t had much of a chance to interact with George as I’m not doing much in the eDiscovery arena.  David and I continue to collaborate on the principles for designing software and for teaching human centered design.  However, our collaboration has taken another wonderful twist as David gets more involved with institution building at UW Bothell.  We are extending our collaboration into the realm of innovation and the university.

While I don’t have the personal email network visualization tool I wish I had, if I did have 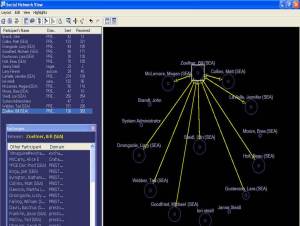 one, the relationship network visualization of the three Socha brothers and how they’ve shared their relationships with me would be interesting.  Two of the three Socha brothers would have hundreds of links emanating from their nodes that we now have in common (as derived from the number of email addresses in the combined set of shared emails), while John’s visualization would only have links to his two brothers.  Further, if there were an email traffic analysis and timeline analysis, we would see that I have almost no communication with George over the last three years and a dense set of communication with David since we first met.  With both George and David, those links have led to strategic networking relationships with members of their respective networks.

My life is deeply enriched by meeting all three Socha brothers and the connections in their networks.  I am thankful this holiday season that my collaboration with David continues to evolve in wonderful ways.