Technology envy is a dangerous thing. My iPad 3 (sorry Apple, I have to distinguish it somehow from the previous two iPads that I have) arrived this morning. It seems I am not the only one that is having a problem making sure other folks know that I am one of the first kids on the block to have an iPad 3.  From Joy of Tech:

I reverted to ordering online as I did for the original iPad as it took forever (well OK, only weeks) to find an Apple store that had an iPad2.  My colleague Bandon Fleming, was kind enough to pickup the iPad 2 for me as I couldn’t get from Bainbridge Island to the Apple Store in the University District early enough in the morning to snag one.

I was delighted to see that my new iPad actually shipped from Ontario, CA on March 11, 2012. Then it just sat in Oakland for a couple of days. I had hopes that maybe somebody had screwed up and I could get my iPad 3 early. No such luck. Fedex became Apple’s staging warehouse for the online pre-orders.

Like a kid on Christmas morning on the momentous March 16, 2012, I bounded out of bed to check on the FedEx shipment travel history to see if the package was out for delivery. Indeed the package had made it out for delivery, but the bad news was they had delayed the delivery estimate until 7:30pm. Bummer. Then the doorbell rang at 10:30am and my iPad 3 was at its new home.

I ripped the box open and pulled out the iPad and immediately turned it on. To my surprise, the battery was charged to almost 100%.

I’d spent the previous day backing up and rearranging my iPad 2, so I just had to plug in the iPad 3 to iTunes and let the download flow.  Having 150 apps and lots of Kindle content and audio content meant that it took about an hour for everything to flow through the USB pipe. Finally, I got it freed up and then I could set the two iPads side by side and see if there was any noticeable difference. While I went through a wide range of apps from Flipboard to USA Today to iTunes movies (Blind Side) to Facebook to Inspire Pro to Google Maps, I really couldn’t see much difference with “Resolutionary.” Even with all the extra resolution, the iPad still shows only the same number of app icons per page so you can’t even tell a difference there.

The only two apps where I could see a difference were with the photo app and with the iBooks app.

As you can see there is a larger field ov view from the camera with more of the foreground outside my office and you can see two of our deck pillars instead of one.  You can also see greater resolution in the blades of grass.  So clearly the 5 megapixel camera is a big upgrade.

The iBooks app was clearly upgraded for the new retina display.  You can see a difference in the hairline characters like an “l”. The crispness of the characters reminded me of the first time I saw a 300 dpi LCD display while consulting at Xerox PARC in the early 1990s. The minute I saw the beautiful hairline characters and tiny line drawings on a CAD circuit drawing was when I realized that when these devices became popular I could move away from my beloved hard copy books. That time is now. 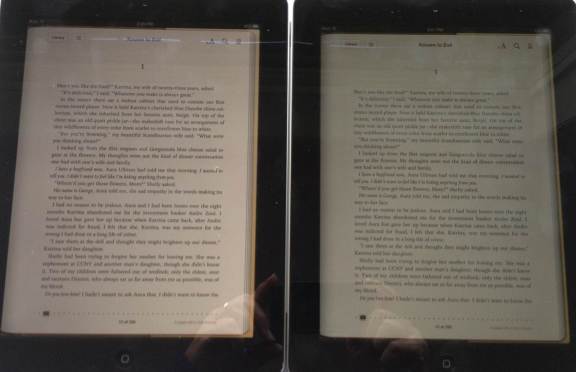 The iPad 2 is on the left and the new iPad 3 is on the right. To better see the comparisons between the two iPads, I pulled out the magnifying glass: 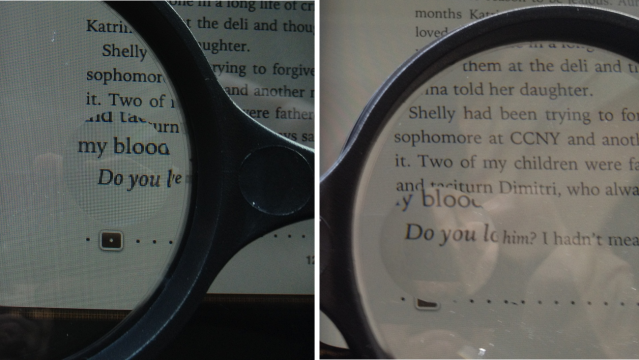 Even with the photo taken with an iPhone 4s, you can see the crisper characters of the iPad 3 on the right. In real life you can see how much blockier the pixels are on the iPad 2. Hopefully, the greater resolution will be easier on my eyes with all the reading I do.

The only real problem I had with getting things setup was the problem I’ve had each time I’ve gotten a new device (iPad or Kindle Fire) – figuring out how to download all my books. I spent an hour trying to get to my books in the cloud with the Kindle app. I finally started over and un-installed the Kindle app, re-installed the kindle app and created a new login account. Somehow everything worked and I could see all my books in the cloud. Now I just have to tap on each book 1000 times to download all the books. Even though I only do this once every year or so, it is still a pain. I wish Amazon would finally do a bulk download.

At first glance, the iPad 3 is not that big an improvement over the iPad 2. Thus, the big winner in the iPad 3 availability is the lowering of the price of the iPad 2. Unless you plan on doing a lot of photography with the iPad, the iPad 2 is a better deal.

I don’t have any obvious compute intensive jobs so I haven’t done a comparison of the new higher speed processor. On the good side, I didn’t really notice the minor increase in size or weight. As advertised the battery life seems to be as good as on the iPad 2.

While the geek in me is delighted that I have the new iPad 3, I am bummed that nobody will know. At least with the iPad 2 you had the new cover to distinguish between the original iPad and the iPad 2.  The iPad 3 uses the same cover as the iPad 2, so even that doesn’t let others know how cool you are. I ordered a new iPad cover in Carolina Blue and gave my wife the new one for the trickle down iPad 2 as her alma mater made it through the first round of March Madness, unlike my Duke team.

This entry was posted in Content with Context, Design, iPad, Photos. Bookmark the permalink.

2 Responses to Upgrading to the iPad (3?)