In August I made the mistake of trying to run in some of the new “Born to Run” NB Minimus shoes from New Balance.  I thought I had made all of the appropriate stride and upright stance running changes.  At the end of the 1 mile trial run, I could barely walk and something was really wrong with my right Achilles tendon.  Several months of rest didn’t help and I was no longer able to exercise which led to me putting significant weight back on.  I was once again in the vicious cycle of weight gain and lack of exercise.

Finally, I asked my chiropractor to check my Achilles tendon out.  He quickly felt the

problem and suggested that I probably had at least a partial tear.  I asked him if he had any magic herbs that could help out and he suggested Bromelain (an extract from the stems of pineapples) as it is supposed to relieve tendinitis.  After even a few days of taking it, I was walking without a limp and without pain.

In hopes that with the reduced pain, I might be able to start exercising, I looked for an iPhone app that might help me track my exercising.  After reading several reviews, it looked like iMapMy for iPhone would work best for me.  I was already using the web based app and hoped that this app would work in mobile form.

With a simple push of the button to start the recording I set off on my 3 mile course.  I had no idea whether the GPS would work because one mile of my course is in the woods.  However, everything worked well and the app kept track of my distance and the time I took to walk the trail. 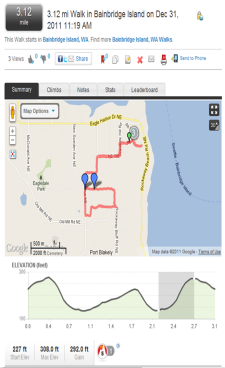 The most pleasant surprise was seeing not only the route but also the elevation profile.  At the end, I just hit the Stop button and then the Save button and my map and exercise workout were automatically saved to the website.

Now I have yet one more reason to take the iPhone with me while I am exercising as I can not only log the exercise but also listen to my music.  Now if I could only take photos and have them appear on my route map – oh wait a minute, there is an app for that – the paid version of iMapMyRun+.  Stay tuned for the next exercise activity – maybe I can grab a picture of the bald eagle I usually encounter or one of the many Bainbridge Island deer.

This entry was posted in Exercise, iPhone, Travel. Bookmark the permalink.

2 Responses to Exercising Again with Technology