You have to love some of the things that the government spends time and money on.  This week we learned that the Washington State Ferries passenger carrying capacity has to be lowered considerably due to the average weight gain of American adults.  Somehow this was important enough or we had a slow news week to make National Headlines.  From the Washington Post:

“SEATTLE — The Washington state ferry service isn’t going to start turning away hefty passengers, but it has had to reduce the capacity of the nation’s largest ferry system because people have been packing on the pounds.

“Coast Guard vessel stability rules that took effect nationwide Dec. 1 raised the estimated weight of the average adult passenger to 185 pounds from the previous 160 pounds, based on population information from the Centers for Disease Control and Prevention

“During the past 20 years, there has been a dramatic increase in obesity in the United States and about one-third of American adults are now considered obese, the CDC says on its website.

“That has effectively reduced the amount of passengers by about 250 passengers or so depending on the particular ferry,” said Young, who is based in Seattle. “They generally carry about 2,000, so it’s down to 1,750 now.”

“With that many passengers, the ferry wouldn’t tip over even if everyone ran to the side at the same time to look at a pod of killer whales, he said.

“The state operates 23 white and green vessels on 10 routes across Puget Sound and through the San Juan Islands to British Columbia. Carrying more than 22 million passengers a year, it’s the biggest ferry system in the United States and one of the four largest in the world, said system spokeswoman Marta Coursey.

“The ferries themselves could be contributing to passenger girth. The galleys cater to customers looking for fast food they can eat while looking out the windows at the scenery and seagulls. Calorie counters typically aren’t buying the hamburgers, hot dogs and chicken strips.

“We do serve light beer,” said Peggy Wilkes who has worked 20 years for the food concessionaire, Olympic Cascade Services, which serves food and drinks on 12 of the state ferries.

“News reports of overloaded ferries sinking in other parts of the world are sometimes a topic of discussion, she said.

“I think it’s cool the Coast Guard is keeping up on that,” she said. “Not that we overload them. A couple of times, like for a Seahawks game, we’ve had to cut off passengers and had to leave them at the dock.”

“Carol Johnston, who has been riding the state ferries since 1972, said she found the rule change perplexing.

“The ferries are not listing, they are not sinking,” said Johnston, who was onboard a Seattle-bound ferry from Bainbridge Island Wednesday afternoon. “How are you going to establish how much weight there is on the ferry?”

“Johnston worried about the potential loss in revenue, which could cause ferry fares to increase further. And she joked she may alter her eating habits.

“That means I will not have popcorn with my wine,” Johnston said.

“The reduced passenger capacity is unlikely to have much practical effect on the spacious ferries, said Coursey, the system spokeswoman. The ferries often fill up with vehicles, but the number of passengers, especially walk-ons, is seldom a problem, she said.

“The new stability rules may have a bigger impact on the smaller charter fishing boats, such as those that take anglers fishing out of the Pacific Ocean ports of Westport and Ilwaco, Young said. Any vessel that carries more than six paying customers has to be inspected and certified by the Coast Guard as a passenger vessel.”

Today’s editorial in The Seattle Times captures the issue with wonderful tongue in cheek humor: 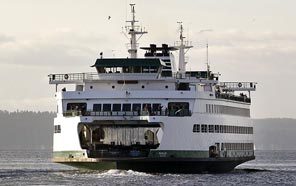 “A widely circulated Associated Press story described how U.S. Coast Guard vessel stability rules were rewritten to account for the estimated weight gain of adult passengers, from an average of 160 pounds to 185 pounds.

“Blame the Centers for Disease Control for noticing the extra pounds, and the resulting Assumed Average Weight Per Person. Oh, and the regulatory arithmetic applies nationwide, across passenger-vessel categories.

“Combine the scenic beauty of Puget Sound with the presence of iconic employers including Microsoft, Boeing, Amazon and Starbucks, world class higher learning, and a well-educated, globally connected and humble populace, and it drives others mad.

“They look for any reason to snicker and giggle. So sad.

“Outlanders do not appreciate the glory and tradition behind the nation’s largest ferry system. For example, they are sized like lattes — super, jumbo and ginormous.

“People cannot understand the high caloric pride in these vessels, from the historic Kremekalakala to the Black Forest Chetzemoka, The Walla Walla Super Sweet, the Chocolate Cathlamet and the Cherries Kittitas. Each is a treat to ride. Especially the seasonal Egg Nog Tillikum.

“We see the crowd shots at televised sporting events. Come and visit and enjoy healthy grilled salmon. But please don’t try to board the ferries, at least not all at once.”