As I step back into the world of legal eDiscovery, it is a delight to see that this market segment has finally achieved market notoriety – cartoons are showing up making fun of the work of our dedicated professionals.  CaseCentral is doing a wonderful job with their weekly cartoon on legal humor.  An example of their insightful and wry look at the world surrounds the joys of email: 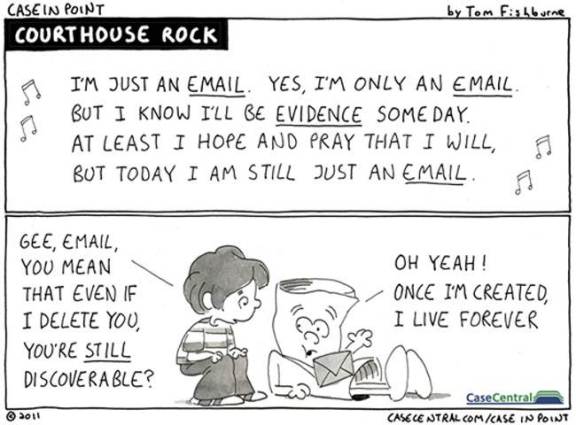 Yet, an industry’s effect on the world isn’t really felt until it is mocked in Dilbert.  This week Scott Adams captured the foibles of eDiscovery as only his wonderful world view can:

The Dilbert cartoons reminded me of an interaction with Bill Gates, Sr. (author of Showing Up for Life: Thoughts on the Gifts of a Lifetime), during the first year of the development of Attenex Patterns.

An important value that Preston Gates & Ellis (now K&L Gates) brought to the development process was to bring technology industry luminaries by to get demonstrations of what we were up to.  One of the most fun demos that we did was for William H. Gates, Sr (yes, that is Bill Gates dad and one of the named partners for Preston Gates & Ellis).  Gates, Sr. would usually come by Preston Gates in the summer to address the summer associates about his views of what it means to be a lawyer. For this summer visit, Gerry Johnson persuaded Gates, Sr to come by and see that a law firm could fund innovative software development.  Gerry also wanted to give Gates, Sr. visibility into how large the eDiscovery problem was growing for Microsoft since Preston Gates did most of Microsoft’s eDiscovery work.

We prepared more extensively than usual for this demo.  By the time Gates, Sr., arrived to see the demo he was clearly quite tired.  I was concerned that since we were running late we would put him to sleep in a darkened room.  So I shortened my introductory slides and got right to the demo (seen above).

Just at the point that I thought I had put Gates to sleep, he straightened up and looked at me and said “So how many lawyers does it take to annotate a given document and the collection of documents with all those concepts?”

I replied “No lawyers at all.  Our content analytics software is able to figure out all the meaningful concepts within each collection of documents.  Everything you are seeing was done automatically.”

He looked at me again like I hadn’t understood the question, “No.  Really.  How many lawyers did it take to mark up these concepts?”

Bill Gates, Sr., then turned to Gerry Johnson and said “Gerry.  Really.  How many lawyers does it take to identify these concepts?”

As the implications of what we’d just demonstrated dawned on him, he asked “Has anybody demoed this to my son Bill, yet?”

Nervously, we all answered that we had not demoed it to anyone at Microsoft yet.

Gates then almost shouted “Well, will you quickly go over and demonstrate this to him so he’ll quit writing those stupid emails that get him in all that trouble with the Justice Department?”

After we stopped convulsing in laughter, we went on with the demo.  Clearly, he understood the implications.