Advice to a Non-Technical CEO of a Software Startup

One of the challenges of an early stage software start-up is whether to have a non-technical CEO who has a good set of relationships with prospective customers, or to have a CEO who really understands the technology and the art of software development. Like all tough questions the answer is “it depends.” Mostly it depends on how management savvy the CEO is regardless of their professional experience.

The following advice was created for a non-technical CEO who had very little management or executive experience on how to manage software development.

At the heart of management of any software start-up and software development and customer development is a quote from the Quality Guru W. Edwards Deming:

Expect what you inspect

“You can expect what you inspect. Dr. Deming emphasized the importance of measuring and testing to predict typical results. If a phase consists of inputs + process + outputs, all three are inspected to some extent. Problems with inputs are a major source of trouble, but the process using those inputs can also have problems. By inspecting the inputs and the process more, the outputs can be better predicted, and inspected less. Rather than use mass inspection of every output product, the output can be statistically sampled in a cause-effect relationship through the process.”

When you are doing a software start-up, there are multiple parallel processes that are going on simultaneously which is why what is called the “Waterfall Development Process” can never work for a V1 product.  Here is a list of some of the challenges along with proposed solutions or interventions: 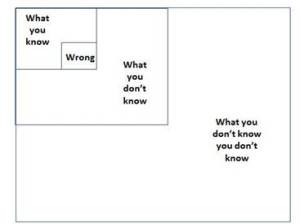 Yes, software start-ups are messy and many days it seems like you are taking two steps backward for every step forward.

My recommendation for dealing with the above in a way that keeps people out of opinion mode or whining mode or “it can’t be done because mode” is moving to a daily demo.  At a minimum, this lets you as the CEO always know where things are in a visceral way, not by trying to interpret status reports or email traffic.

Some attributes of the daily demo are:

As with any software development effort, there are times when it becomes clear that you really need to understand something more deeply.  The thought tool that I’ve found most helpful grew out of Toyota, but I first came across it when studying W. Edwards Deming and the quality movement and six sigma.  Your role as CEO is to make sure that you are getting to the causes of any issues and not dealing with the symptoms. The Deming tool is the “Five Whys“:

“Systematically asking why an event occurs or a condition exists. The question ‘why?’ is applied to each response until the root cause of the event or condition is found. Sometimes the root cause is identified by the 2nd or 3rd “why.” In other situations it may take 6-7 ‘why’s’ to get to the root cause. Try to get to the 5th level without getting to an absurd level of detail.

“At the heart of this simple tool is the belief that real problem solving occurs when the cause, rather than the symptom, of the problem is addressed. This is often referred to as ‘drilling down’ to the heart of the problem. Dr. Kano refers to this ‘drilling down’ as ‘going an inch wide and a mile deep into a problem’ (real understanding leading to targeted solutions) rather than ‘going a mile wide and an inch deep into a problem’ (superficial understanding leading to shotgun solutions). At a more philosophical level, the 5 Why’s also demonstrate Dr. Deming’s principle that the real problem usually lies in the deeper system rather than in the performance of an individual who is working within that system.”

An example of the Five Whys: 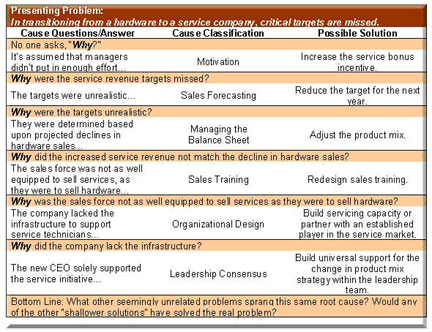 Another thought tool that I find very helpful comes from Ed Lazowska, the Bill and Melinda Gates Professor of Computer Science at UW.  He found that if he tried to answer directly the question that a student or colleague asked him there was almost never a good result.  He realized that to provide a good answer he first had to ask “what is the misunderstanding that caused the question to be asked in the first place?”  Once he knew what the misunderstanding was he could provide an answer that led to understanding.

A wonderful book QBQ!  The Question Behind the Question: Practicing Personal Accountability at Work and In Life provides a comprehensive exploration of Ed’s insight.

The document on Decision Styles that is drawn from Bob Crosby’s Walking the Empowerment Tightrope: Balancing Management Authority & Employee Influence makes clear for those decisions which are important to be explicit about how the decision will be made and who will make it.  With most decisions it is clear.  But there are some decisions, like we are going to only focus on one persona or a single market or which concept search tool to use where it is important that as part of the evolving startup culture that you be explicit about how the decision will be made.  As a general rule you don’t want to have a culture where consensus is the primary decision tool.

For those decisions where you realize that you need to be explicit about the decision style, you should also start the formality of creating a decision record so that you can be working on continuous improvement of the quality of your decisions and which decision styles are working for your organization.  Russ Ackoff provides a quick and direct method for tracking decisions.

The article on Coaching for Performance provides some simple yet effective methods for working with your development talent. The article describes the Situational Leadership Model. 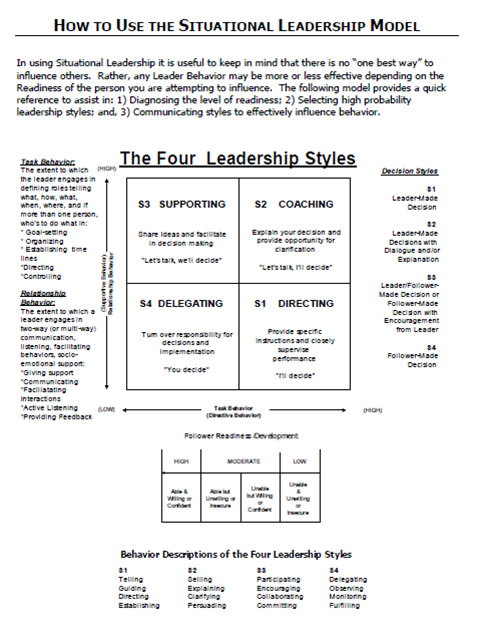 While this “advice” is a lot to absorb for the start-up CEO, by immersing the CEO in the ways to manage a software start-up there is a higher likelihood for success.

For a humorous look at the wonderful world of innovation and new ventures, checkout Fl!p and the gang at Fl!p Comics.